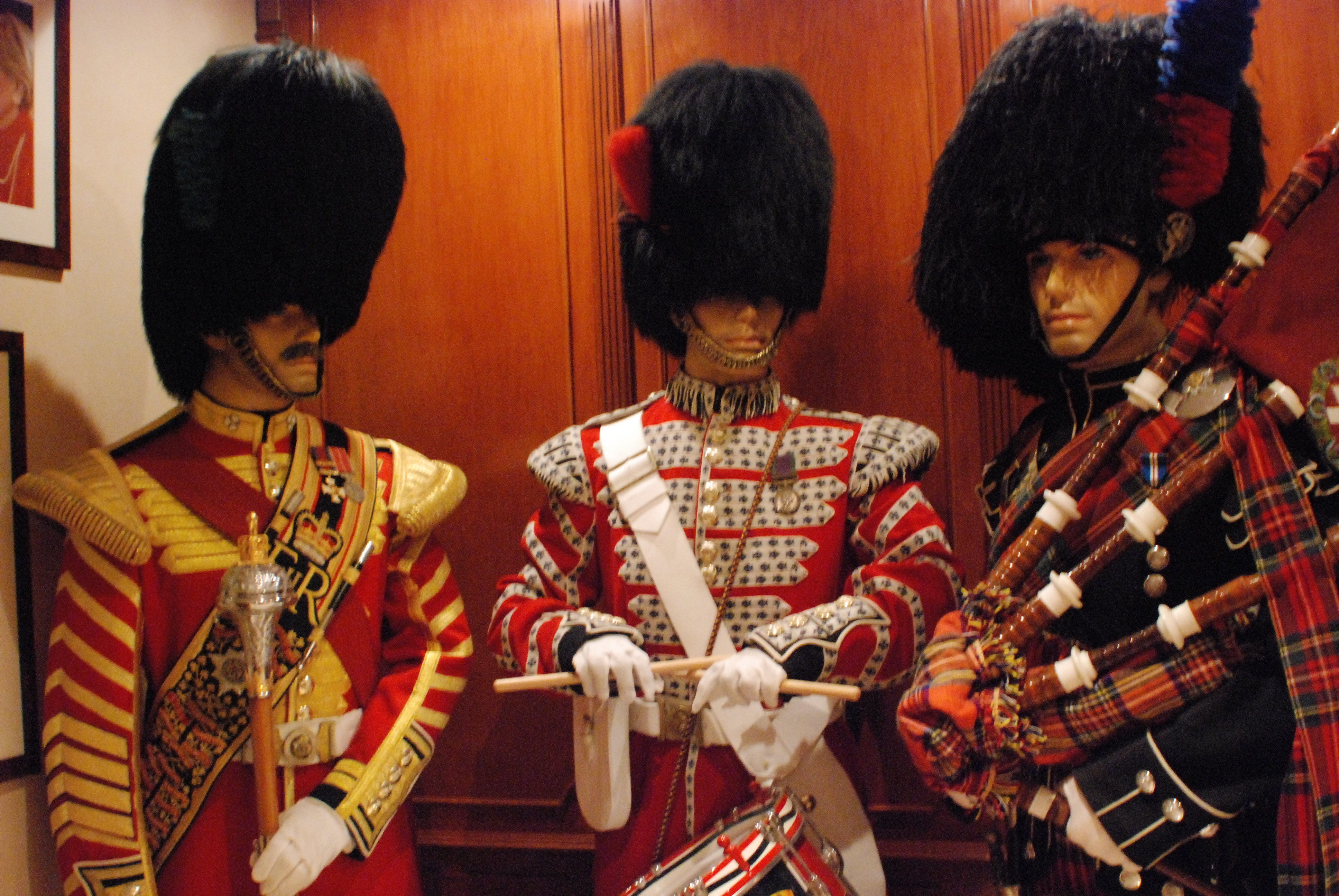 How far can one go off the rails, unexpectedly? In the year 2000 we visited Legoland Windsor with our 4 children for two days, and in between these two days we had one day of sight-seeing in Windsor Castle, Eton College, … In Windsor Castle a small, standard 54mm, Irish Guards piper was bought as a souvenir. The poor man resided for years in his unopened box in a cupboard. Mid 2004 I did a quick search on internet just to have a look what other types of 54mm guards existed, and I found tons of types and series all over the world to be on sale, but I virtually stumbled over a real life size Irish Guards Colour Sergeants uniform too, bearskin busby included. In an irresponsible mood the uniform was purchased: and gone were all inhibitions which are usually mine.

Six years later some 35 head-to-toes fully equipped Guards mannequins are displayed in the house, among which 2 fully equipped mounted horse guards on fully equipped horses, and some five busts. It contains somewhat all kind of ceremonial uniforms used by the British Queens’s/King’s Guards Regiments, with some leaps aside to the Royal Marines, the Royal Company of Archers, … dating from Victorian age until today. All items are verified genuine and with few exceptions in ‘mint condition’. Although resembling, items are all different and unique; the bearskins f.i. all have different shapes according to whom is the user: officer, other ranks, NCO, drum major, drummer, … Some of these are seldom or almost never available for purchase: (1) especially with the upper nobility having decades or longer of army-dynasties with the Household Cavalry or the Foot Guards: silvered helmets, bearskins, cuirasses are often passed on to the next generations; (2) some pieces are seldom used, like the state dress of a drum major, only used on three occasions a year, so they don’t get worn. Luckily I have some excellent providers on the right places…

“Holland’s Wondere Wereld” has been of great help, as it is far from easy to obtain the correct mannequins for all these tailor made, ‘snug fit’ uniforms, sometimes in a specific pose. And I’d better have listened to Mr. Holla of “Holland’s Wondere Wereld” six years ago, when he replied to my message that the third mannequin delivered would be the final one: “a real collector never stops collecting !”. It takes one to know one, apparently…, and he was 100 % right!

To make clear that the Household Division doesn’t consist of “operetta soldiers” but, quite the oppo-site, is formed with combat trained units, I displayed in my collection a Guards-RSM in Falklands War tenue, and just for fun I added a war prisoner in Warsaw pact outfit kneeling on his regimental CCCP-banner. This type of humour is ill appreciated by the Lady of the House, most of all because I tended to unexpectedly displace the war prisoner all over the house, what brought the Lady of the House against the ceiling, screaming. So the wonderful pair, Guard and Prisoner, was banned to the leisure room. Life as it is, with its small disappointments! The negotiations about a third horse in the house with She Who Has To Be Obeyed are at this moment going the wrong way, but that is just at this moment… The thrones with the Young Queen Victoria and her Prince Consort Albert II did make it through the ‘filter’, so not everything in life is grief.

Just one major outfit is missing in my collection: a Gentleman-at-Arms with his pole-axe. But first I need to win Euromillions for that (don’t I need to fill in a lottery-form first?). However, let the mere sight of the pictures establish to each sensible man or woman the caution how fast a person can unwillingly degenerate, unnoticed.

This website uses cookies to improve your experience while you navigate through the website. Out of these, the cookies that are categorized as necessary are stored on your browser as they are essential for the working of basic functionalities of the website. We also use third-party cookies that help us analyze and understand how you use this website. These cookies will be stored in your browser only with your consent. You also have the option to opt-out of these cookies. But opting out of some of these cookies may affect your browsing experience.
Necessary Always Enabled

Performance cookies are used to understand and analyze the key performance indexes of the website which helps in delivering a better user experience for the visitors.

Analytical cookies are used to understand how visitors interact with the website. These cookies help provide information on metrics the number of visitors, bounce rate, traffic source, etc.

Advertisement cookies are used to provide visitors with relevant ads and marketing campaigns. These cookies track visitors across websites and collect information to provide customized ads.

Other uncategorized cookies are those that are being analyzed and have not been classified into a category as yet.

SAVE & ACCEPT
Powered by