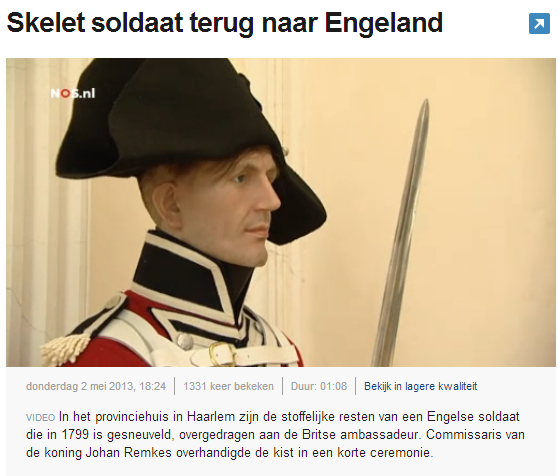 On the Dutch NOS news (May 2, 2013) :
In the provincial government building in Haarlem, the Netherlands, the remains of a British soldier who was killed in 1799 at The Battle of Callantsoog, were transferred to the British ambassador.

His skeleton was found in 2011 in the dunes, along with some clothing buttons and remnants of weapons and ammunition. The regiment of the soldier was traced by his buttons: the still existing Coldstream Guards.

At the ceremony a silicone display figure shows  an uniform of the Coldstream Guards as worn during the battle.

More about The 200-year-old soldier on BBC News Magazine:
Mystery of 200-year-old British soldier found in the dunes of Holland
http://www.bbc.co.uk/news/magazine-22340193

More on the Battle of Callantsoog:
http://en.wikipedia.org/wiki/Battle_of_Callantsoog